I decided to go on a two-hour sail boat trip the Saturday before Labor Day Weekend. The ship was the Manitou in Traverse City. 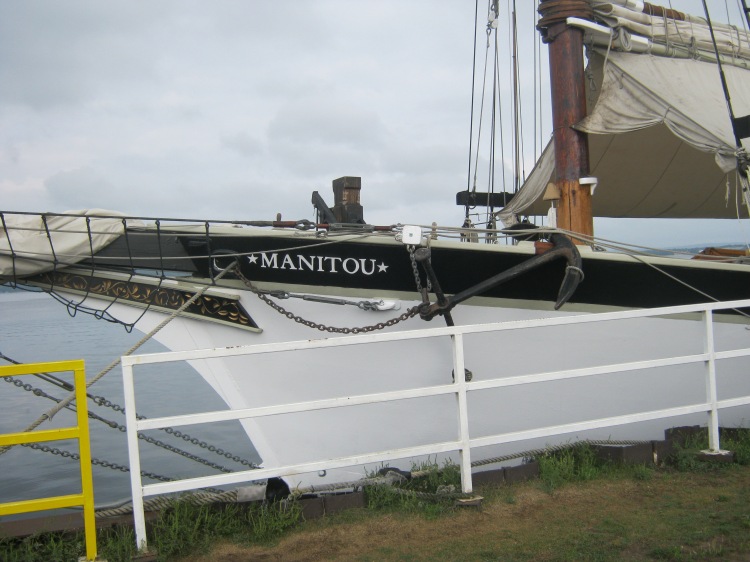 The type of sailboat we went on was a schooner. I looked up the definition. It’s a sailing ship with two or more masts, typically the foremast smaller than the mainmast and having gaff-rigged lower masts. What does gaff-rigged mean? Good question.  I could be looking up sailing terminology all night so I stopped there. 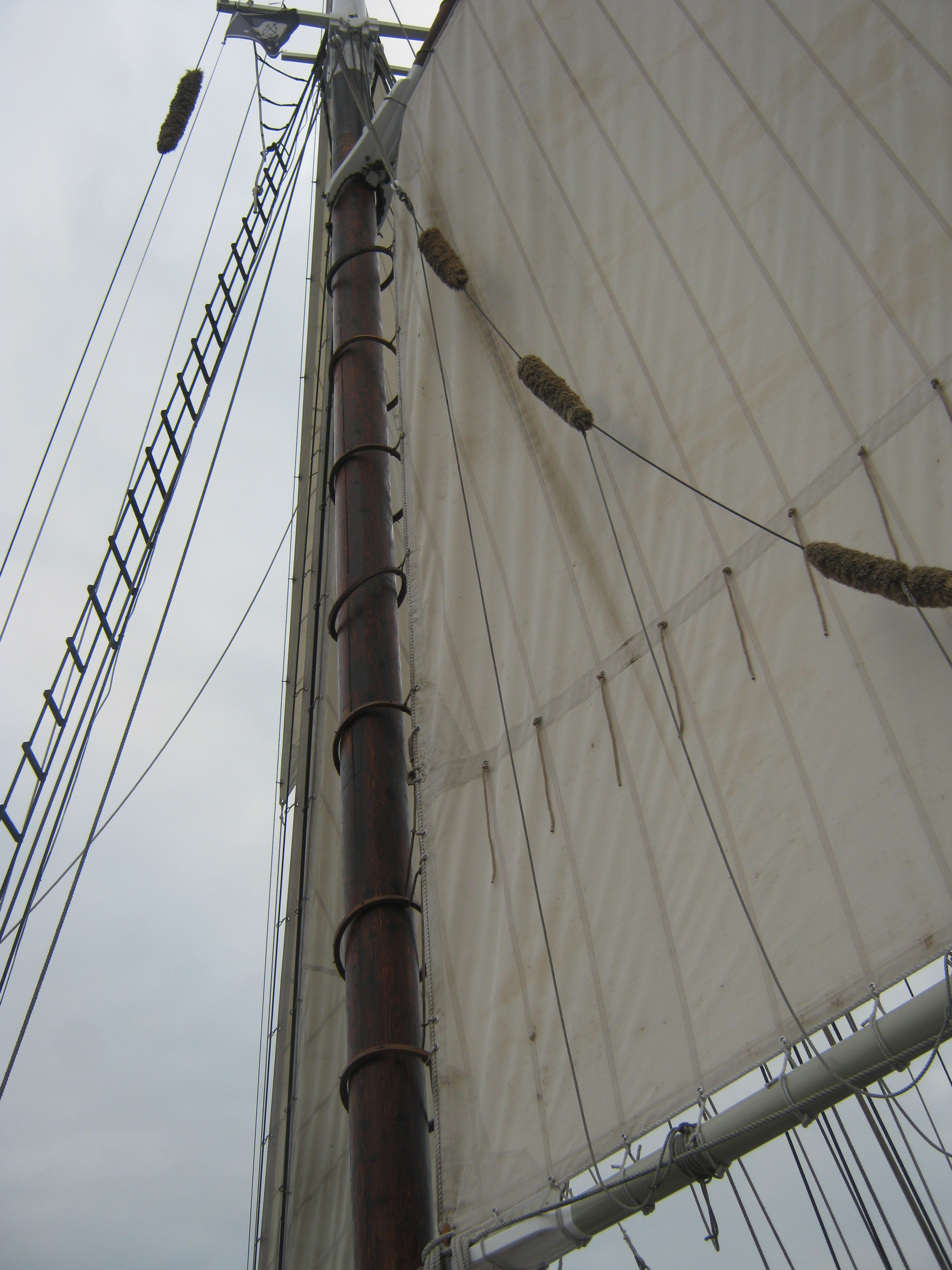 The sails were impressive. 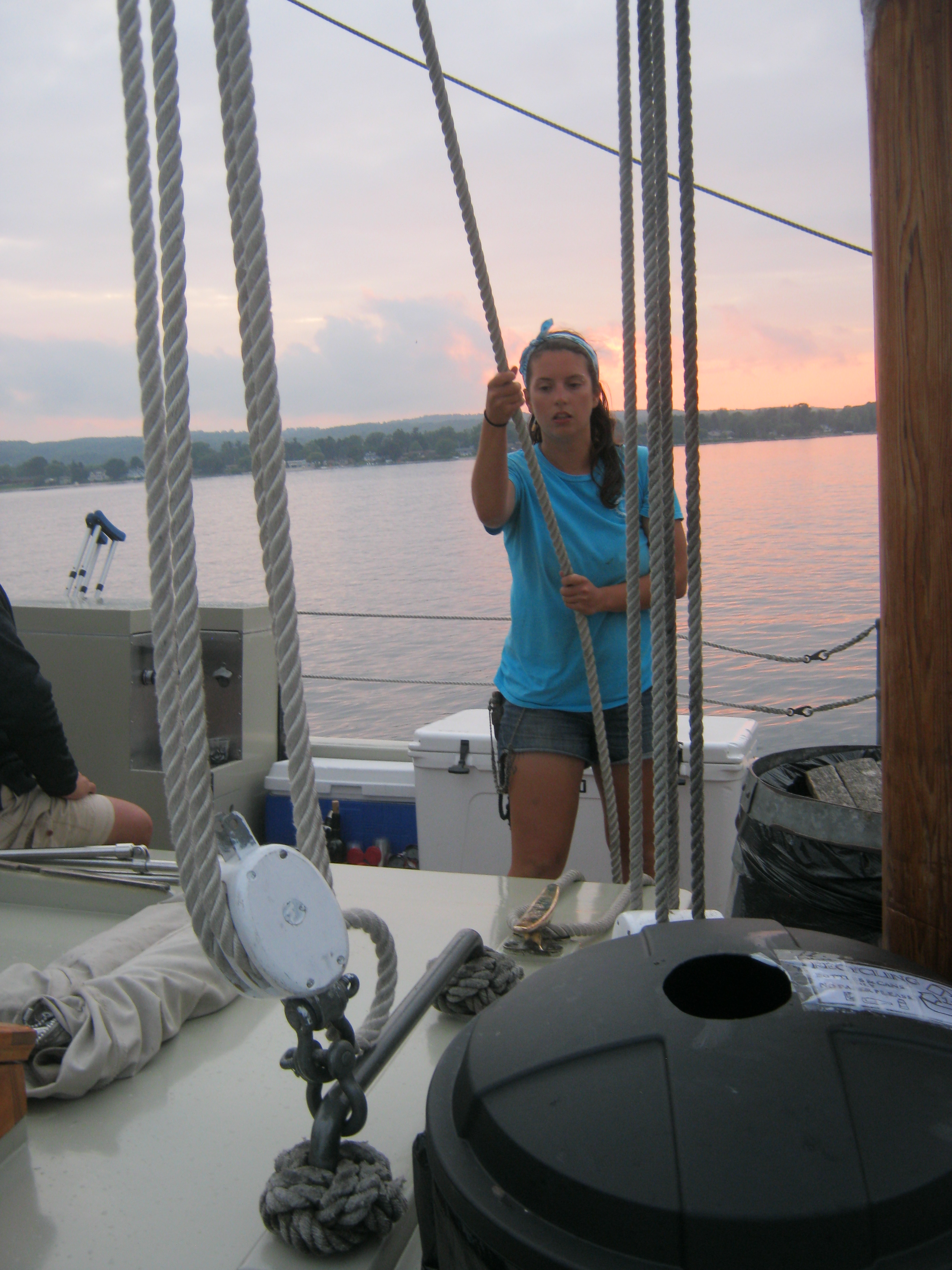 The crew worked hard. It was interesting watching everything they were doing. 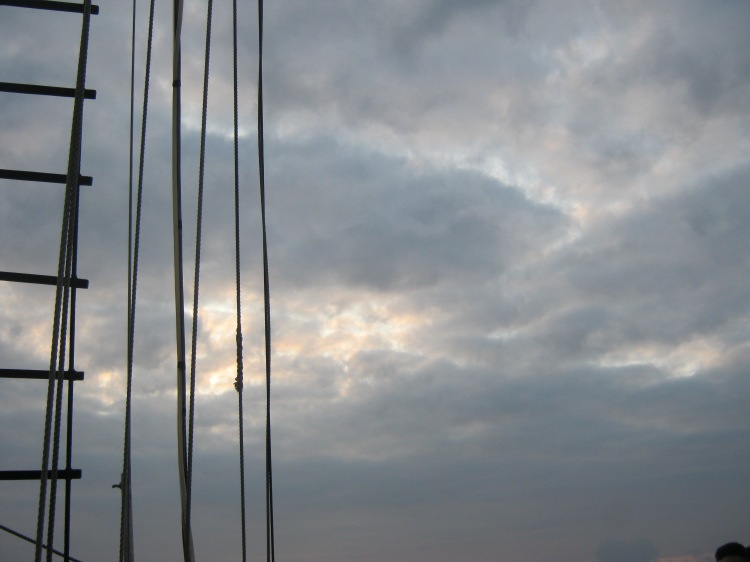 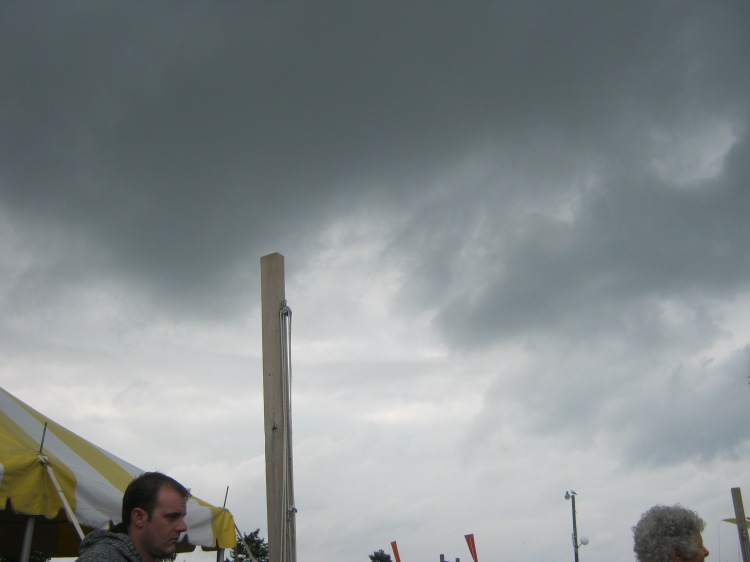 I took this picture just before we boarded. Those rain clouds were kind enough to roll away to the north for us and let us have a dry trip. 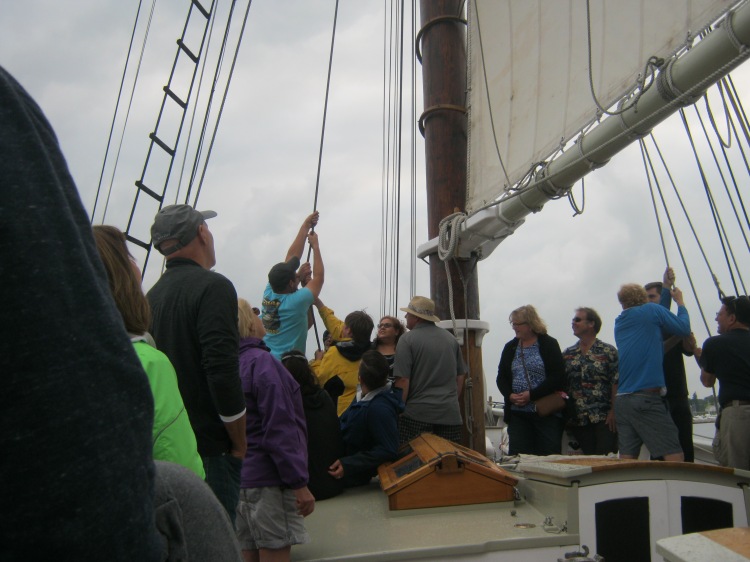 They used a motor to get away from the dock, but once we were far enough from shore, the passengers got to help raise the sails. To raise the main sail, they asked for ten volunteers for each side. We were given a quick lesson on what to do when a command was given. There was a peak team and a throat team. The crew member leading a group would holler “Ready on the Peak!” The other would holler “Ready on the Throat!” The order to haul away would then be given. It started slow, but only for a second and then it was going so fast I could barely keep up. We were standing in a line and we would pull on the rope; passing it to the person behind us. 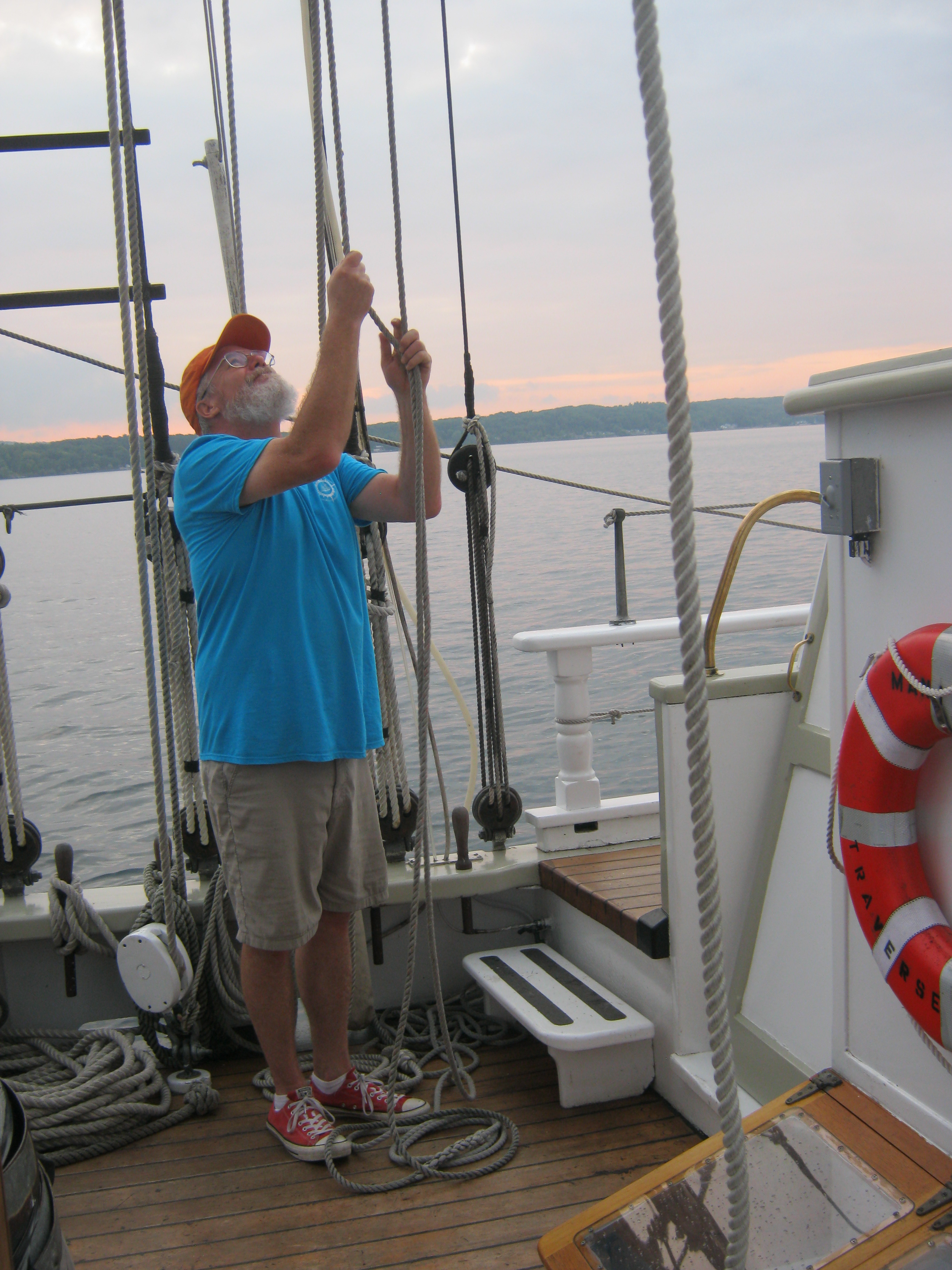 The crew on the ship consisted of this gentleman (John), two young ladies and the Captain. 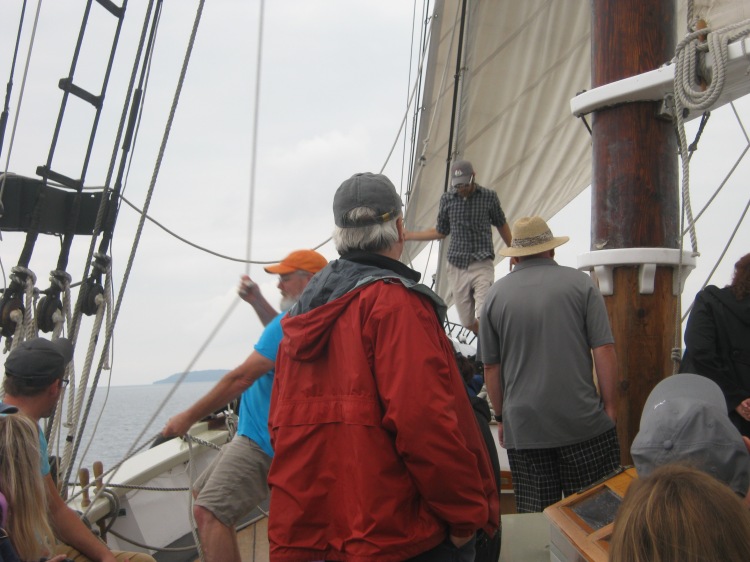 I tried to capture on camera what John (orange hat) was doing. The crew  would grab the rope, pull real hard and they would quickly fall backward (not all the way of course!) to use their body weight to pull the rope and they would bounce back up. It happened so quickly  it amazed me. It was fun to watch. 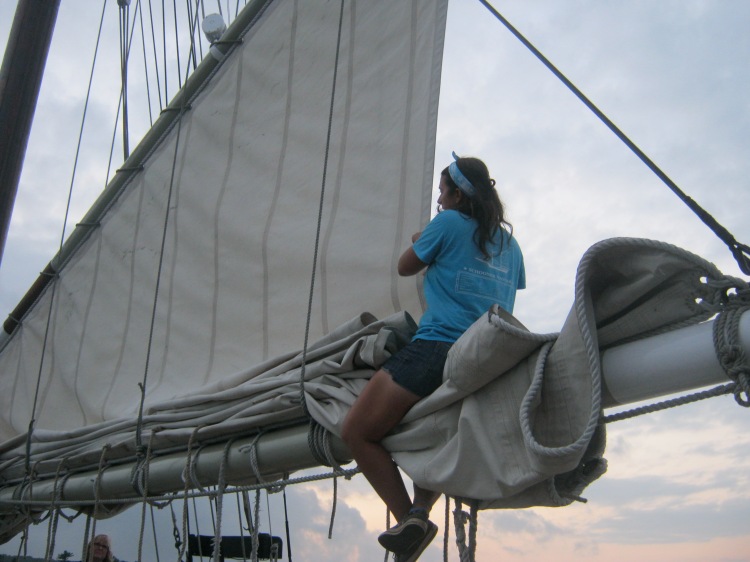 If you’re a lazy person, you don’t want to work here. This crew was in shape! I saw this young lady (Brianna) reach up as far as she could to grab a rope. Then she raised her foot up real high and (if I remember correctly) placed her foot on the boom. She then pulled herself up onto the boom. Wow. That took a lot of strength! 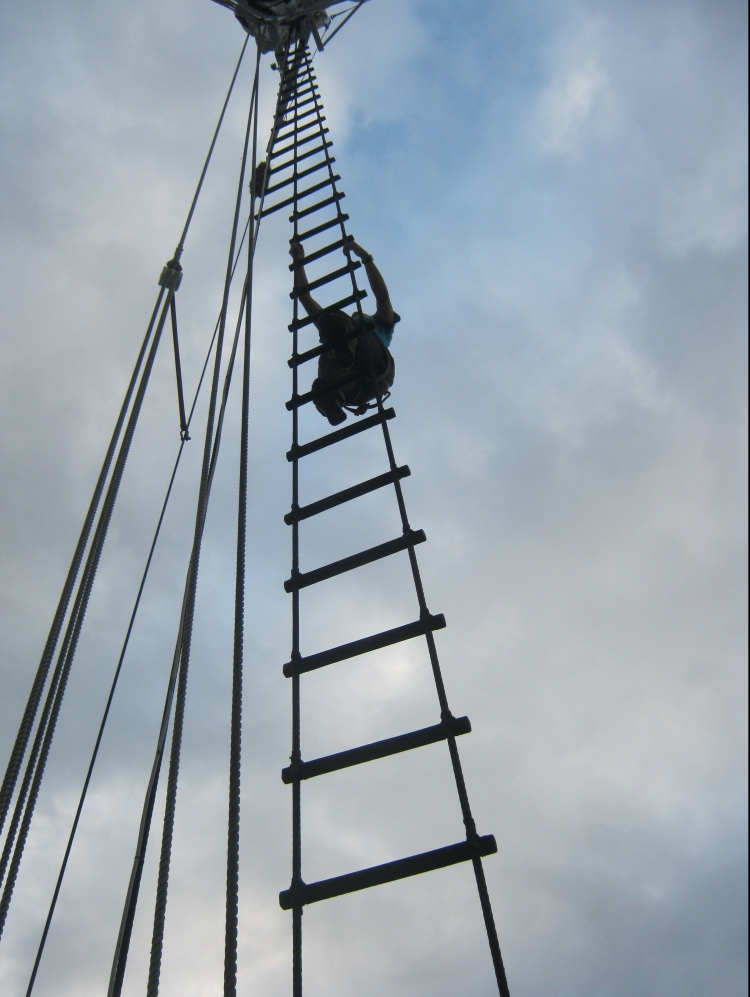 This is the other young lady, Amanda. She put on a safety harness and climbed up to the top to let out a small sail. 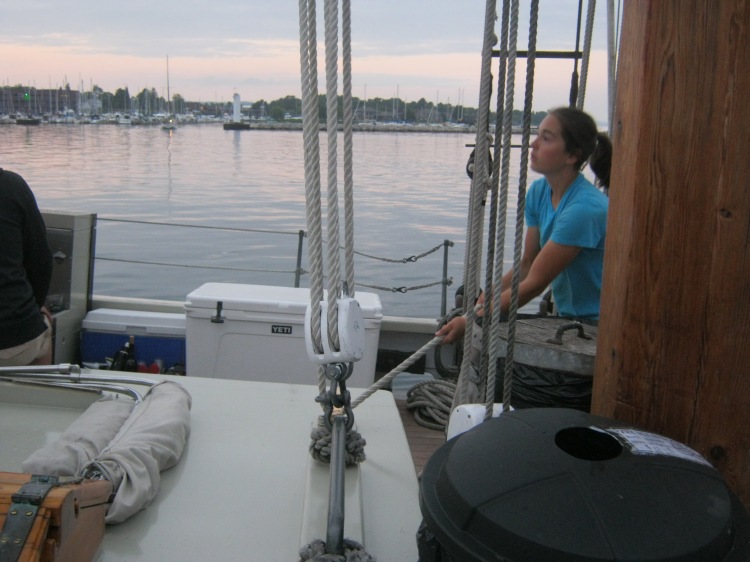 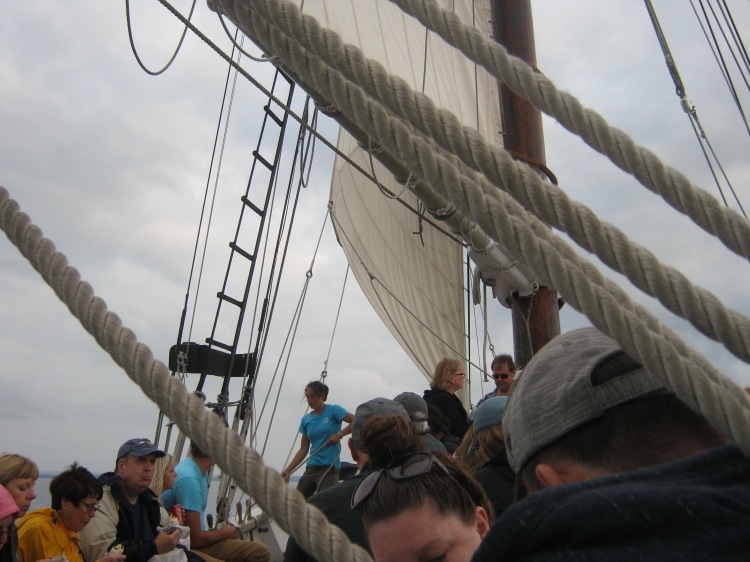 There was an unbelievable amount of rope to pull in and tie up, but this crew was moving and getting things done! 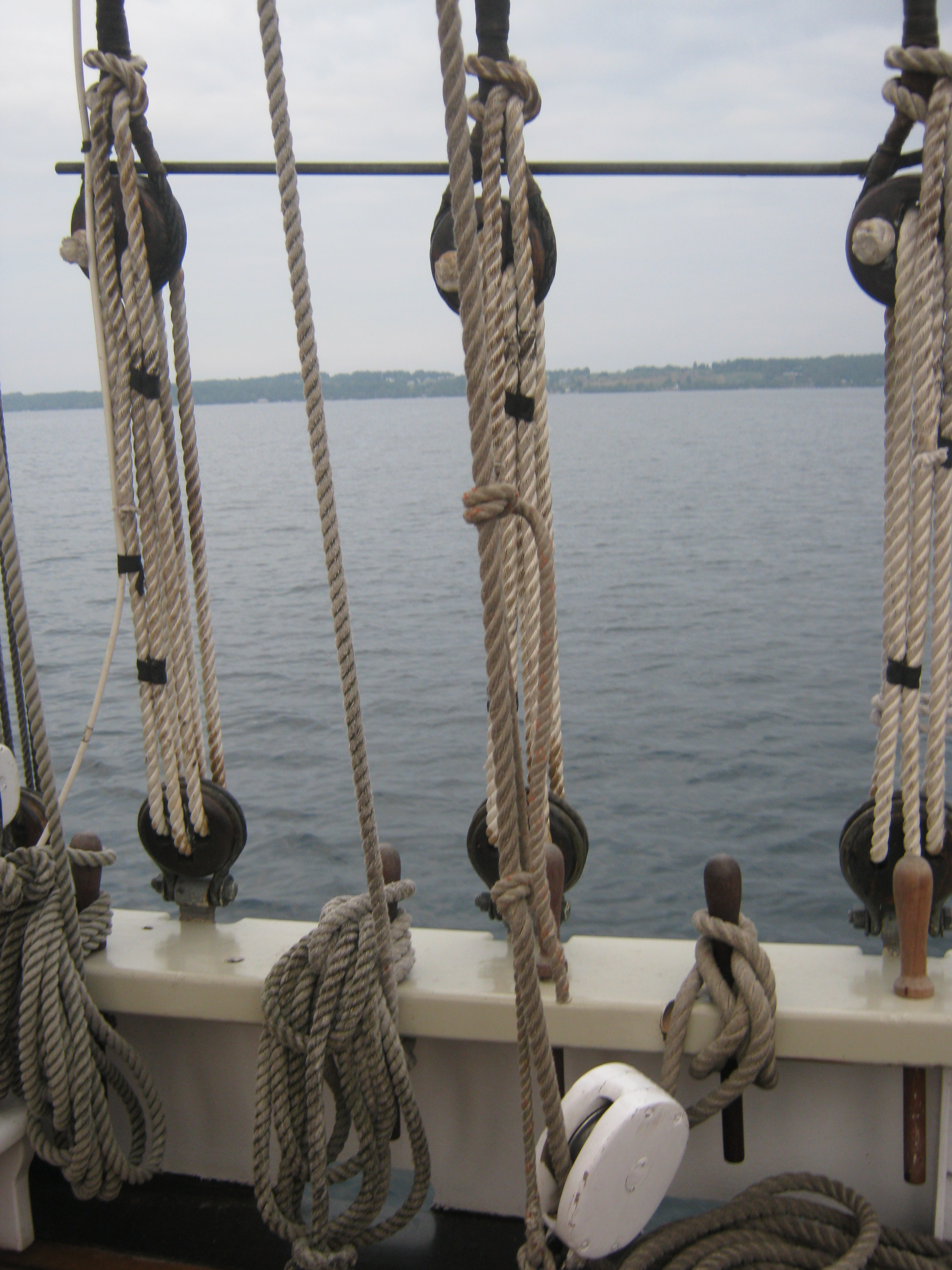 I found all the rope, knots and pulleys interesting. 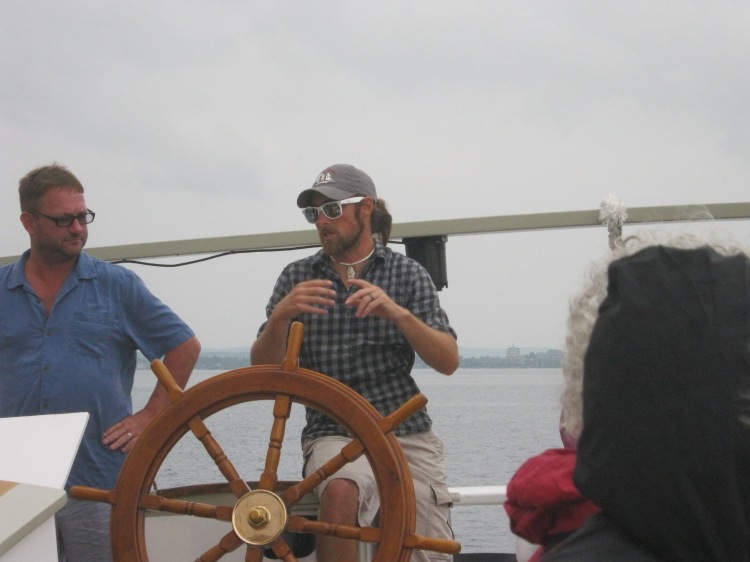 This is Captain Brett. We had two kids on board and he asked for their help with a couple things. The kids loved being included. 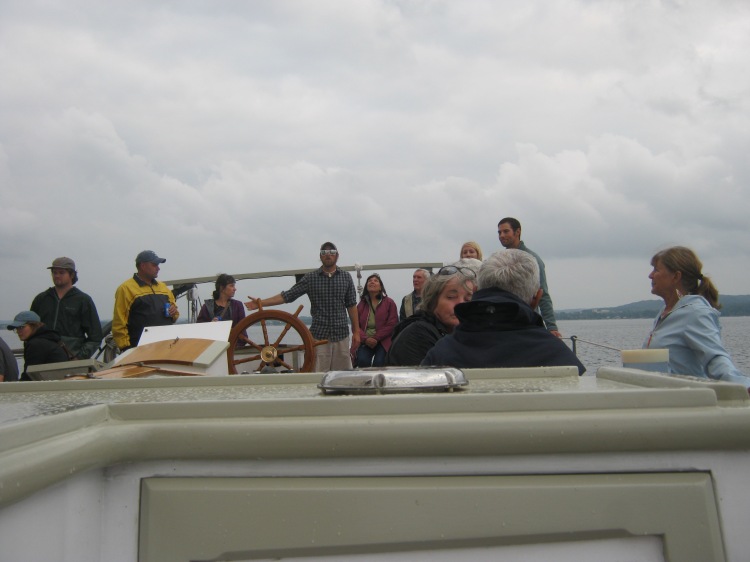 This is the back of the ship. Look at the sky. I was amazed when I looked at my pictures and saw how often the sky changed in just that two hour period. 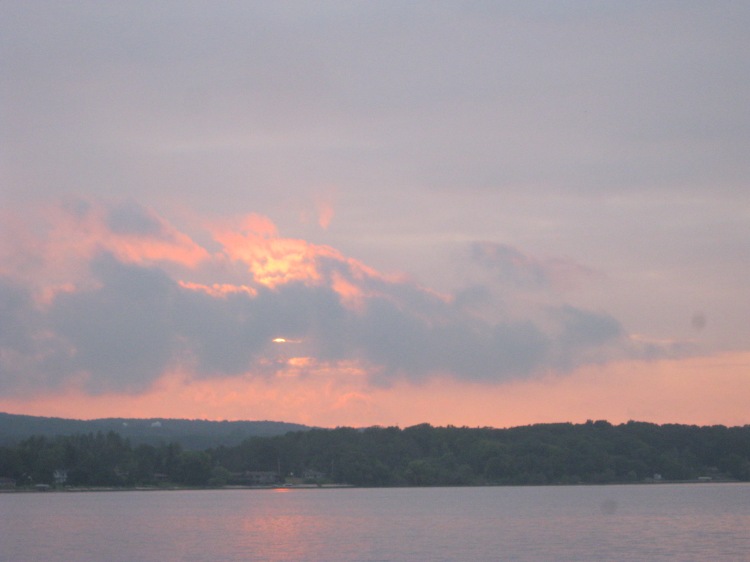 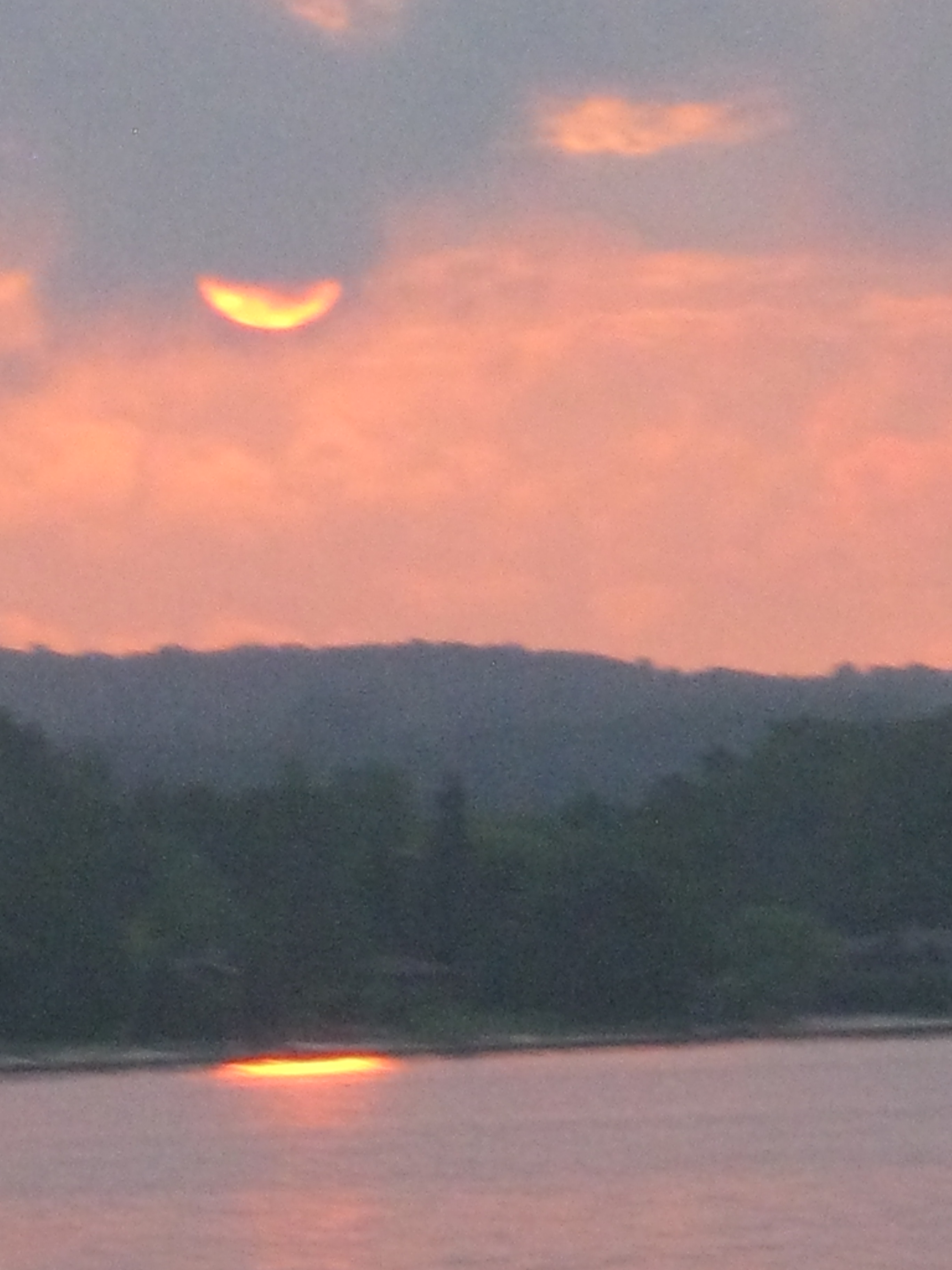 The sun was starting to drop below the clouds. It reminded me of a basketball stuck in a net. 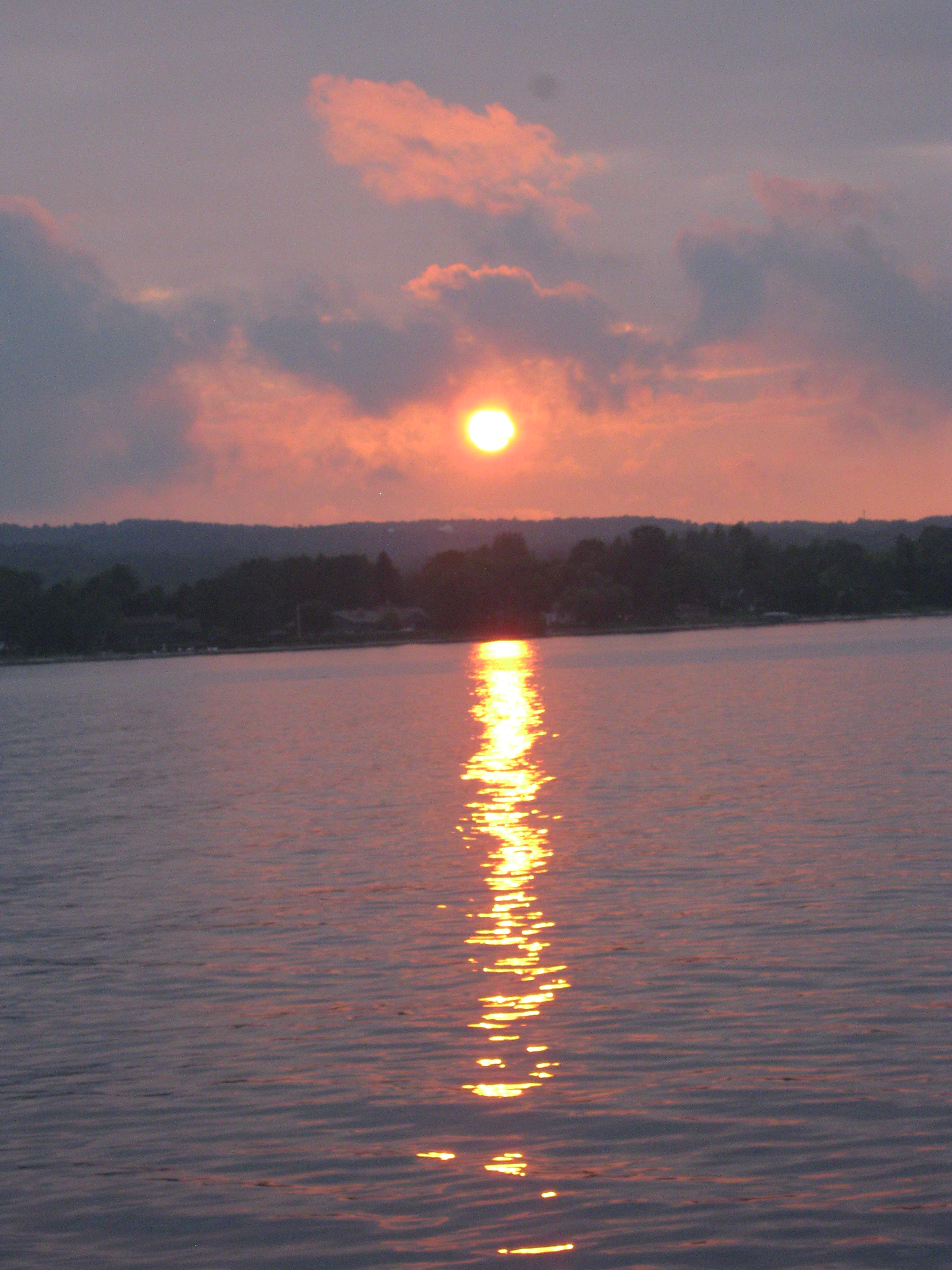 When the sun broke completely free of the clouds; what was just a yellow orb on the water, stretched out to be a long kite tail. 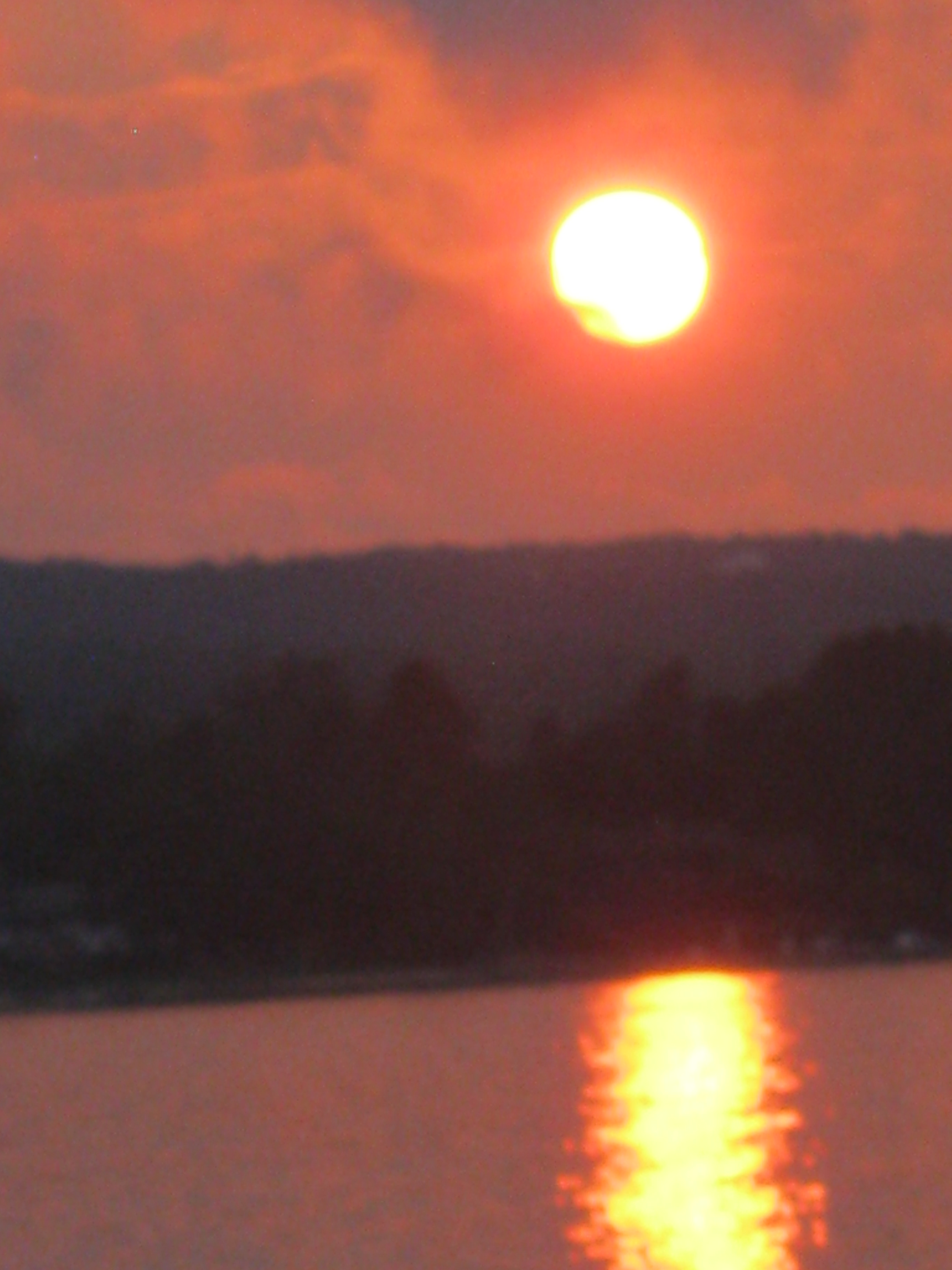 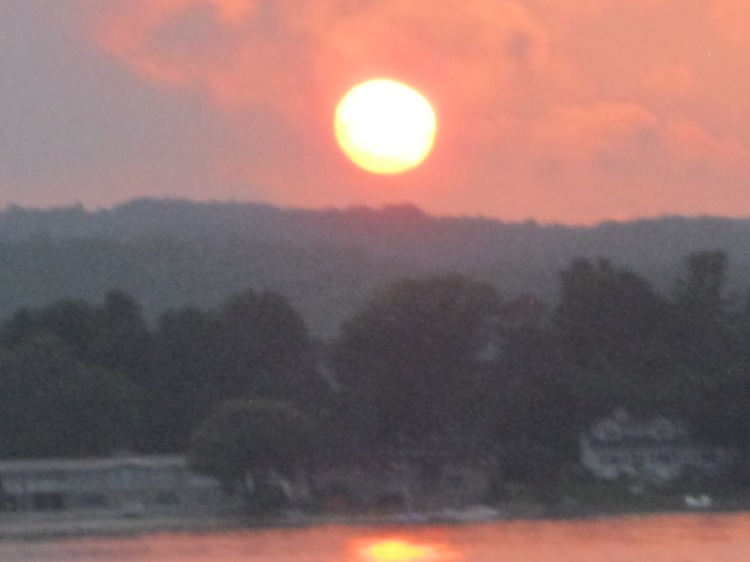 This is when I zoomed in. The color of this sunset was phenomenal. It almost looks like a painting instead of a photograph. 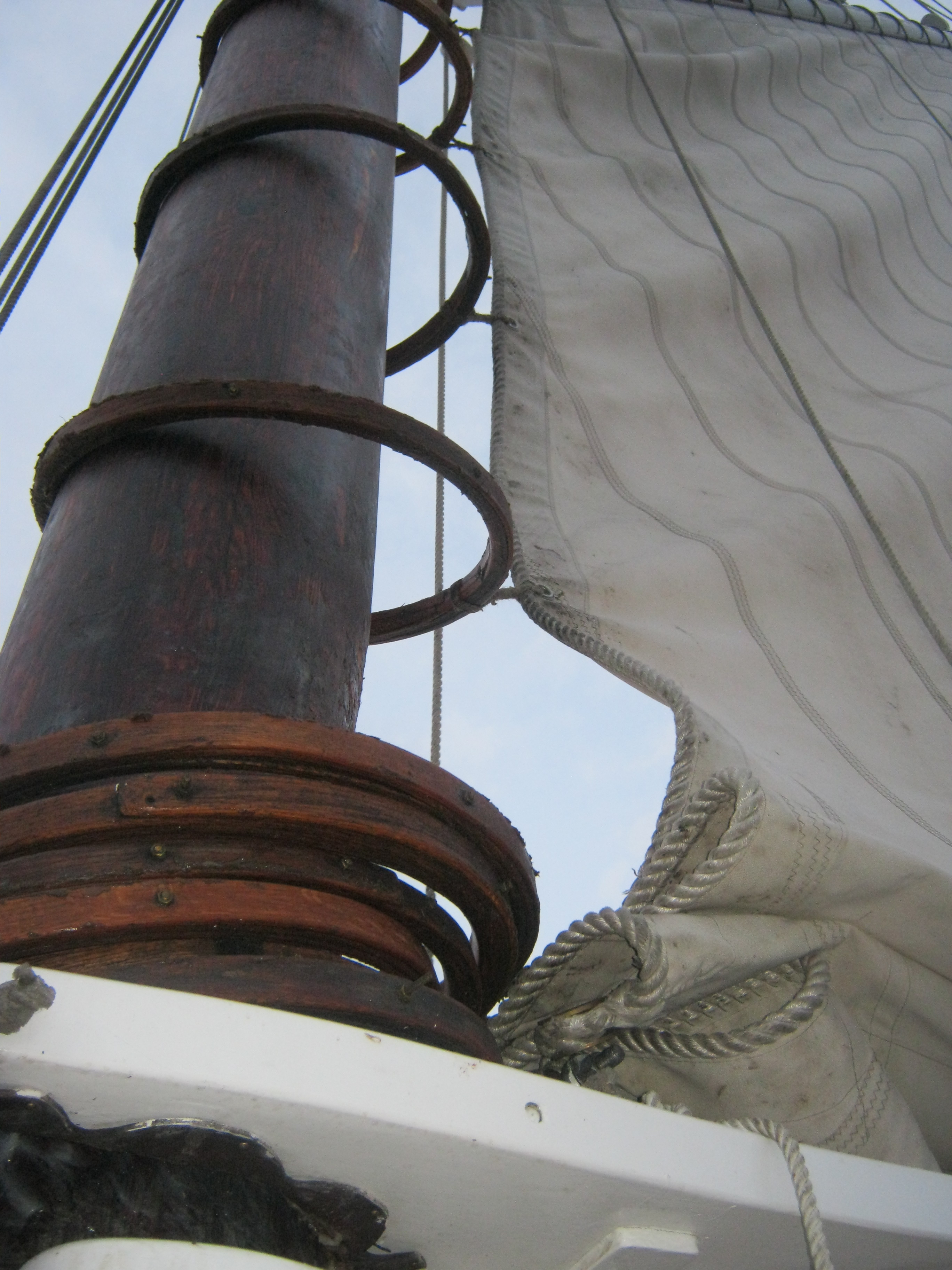 This was the lowering of the sail. 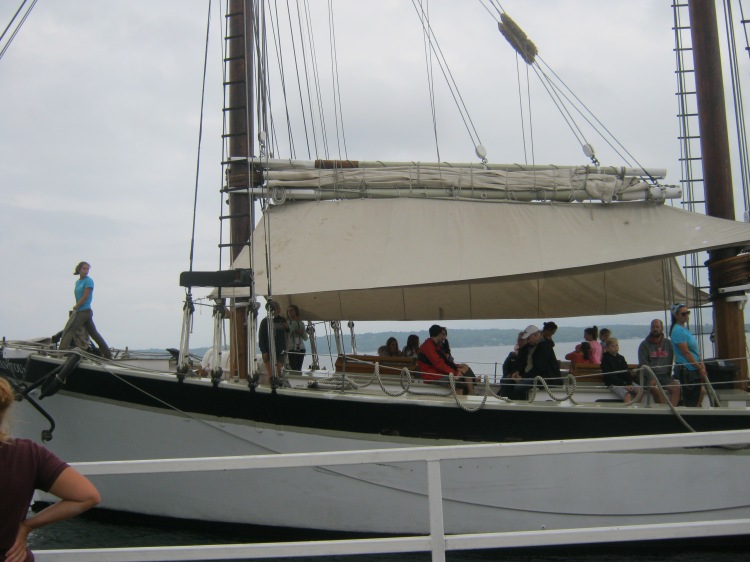 This was the ship when it was coming in with the previous group. It looks like they had a little rain because the tent was up. The rain was nice enough to go away for our group, so they took the tent down .

I went on this trip to do research for my book. I want to have a sailing scene in it and I had to come to gather information. It’s rough what us writers must do for our stories! (You’re not believing the rough part, are you?)

Anyways, this company has lots of sailing options. This trip was the evening sail from 6:30 to 8:30 PM. Because there wasn’t entertainment, it was only around $45.00 and a meal was included in that price. We had a delicious wrap, pasta salad and a big chocolate chunk cookie for dessert. (Prices might change – to get current information;  check out their website) I think most people don’t even think about sailing because they assume it’s real expensive. It’s not and it’s so much fun.

They have an ice cream social trip in the afternoon – great for kids and adults!

Once a week they have a band called Song of the Lakes. It’s only a little more if you come this night and they are awesome. I heard them play around nine years ago. They sing songs about the Great Lakes and the sea. I highly recommend them.

I saw that there’s a wine tasting night too!

One more option: In September they have windjammers. One of their trips is a Story of the Stars Windjammer and they also have a Wine Cruise Windjammer. You’re out there for three or four nights on Lake Michigan and they take you to different islands. I’m thinking about doing that next year. It’s very tempting. When you go on the two hour sailing trip, they stay in the Grand Traverse Bay. It’s simply beautiful out there.