Mom. That one word brings so many emotions to me: joy, happiness, a feeling of being loved, warmth, security and sorrow that I didn’t do more for her. I could go on and on. I’ll share with you some of my Mom experiences. Perhaps it will remind you of your own Mom experiences and bring a smile to your face.

One of my memories is of getting up in the middle of the night when I was young to use the bathroom. As I got to the dining room I heard a baby crying – one of my younger siblings. I can’t remember if it was Don or Julie, but they both were sick a lot when they were babies and toddlers. I turned to walk toward the family room. I spotted Mom before she spotted me. She was walking around the family room with the baby, talking softly and singing. She looked tired. She probably hadn’t had any sleep for days. Even though she had to be exhausted, she had the patience of a saint. She spotted me and asked me what I needed. She talked to me a moment and I went on my way. She always had time for us and her thoughts were always on our welfare. How many nights did she isolate herself with a sick baby at the other end of the house, sacrificing sleep, just so we could sleep? I don’t know.

I remember another time when the Decker family was at our house for a visit. Us kids were playing in the basement. My brother, Bob, was pretending to be a monster and chasing us. I ran under the ping pong table. I thought I was out from under it, so I jumped up hard and hit my head. It hurt bad, so I ran to the bottom of the steps hollering “Mom, Mom!”

She appeared at the top of the steps and asked me what was wrong. I started to tell her. Suddenly, her eyes got big and she bolted down the stairs hollering “Ken! Ken!” My Dad could tell it was serious and appeared in seconds. Mom retold the story to me a few times of how, as she was talking to me, blood started spurting out the top of my head like a fountain.

We lived in Warren at the time. My Mom grabbed a bunch of towels and a blanket and Dad rushed us to South Macomb Hospital, down Twelve Mile road. Two cars were side by side in front of us. They wouldn’t let us through. My Dad was flashing his lights and honking his horn, but the one driver was purposely making sure we couldn’t get by. He probably thought my Dad was just being a jerk. Finally, Dad was able to whip around him. I remember Mom’s face as we passed that driver. I had never seen her so angry. She grabbed a handful of blood-soaked towels and shook it at him as she yelled. That wasn’t Mom’s nature. She was always easy-going. But…don’t mess with Mama Bear’s cubs!

During my adult years my Dad had to have two open-heart surgeries at the U of M hospital in Ann Arbor. I remember us six kids and some of our spouses all sitting in the family waiting room with Mom. Everyone in the waiting room had someone there with them except this one wrinkled old man. He had to be about ninety. I remember feeling bad that he was alone.

As I was sitting there, doing nothing, Mom went over and sat next to him. I seen him talking, smiling and nodding his head. We found out that his wife, whom he had been married to around seventy years, was having surgery. They had no children. He was alone.

My Mom always had the compassion to see someone was hurting and she wanted to help – even if she could only distract them and alleviate their suffering for a moment – it was worth it to her.

Another night, Julie and I had to go somewhere. When we got back to the waiting room, we spotted Mom talking to this tall, long-haired dude. They were in the middle of a discussion, so Julie and I slowed down, not knowing if we should interrupt or not.

Mom spotted us. “Come here. Come here,” she said to us, waving us over. She introduced us and told us how this gentleman had been there all day because someone he knew was in a terrible car accident. “Today’s his birthday,” she told us, “and no one’s even sang happy birthday to him.”

Too late. We couldn’t escape. “Let’s all sing happy birthday to him!” Mom said.
So… Right there in the crowded emergency waiting room, Mom starts singing. Julie and I couldn’t leave her hanging. We had to join in. The guy was laughing and shaking his head. I don’t think he ever met someone quite like Mom before.

After the first few days at the hospital, everyone had to get back to their kids and / or work. Connie and I were able to get time off from work and our kids were grown up, so we stayed on with Mom for several days more. The Ann Arbor hospital has a hotel connected to it that you could stay at fairly cheap if you had family in the hospital. That’s where we stayed.

The first night that it was just us three, Connie and I slept in the one double bed. Mom slept in the other double bed. When we turned the lights out, the room was completely dark. Mom had been so strong this whole time, but lying there alone, she started weeping. On went the light. The three of us cried and hugged each other.

The next night we talked a while then turned the lights off. Again, complete darkness. You couldn’t even see your hand in front of your face. We told each other good night.

There was complete silence. A couple minutes later there was a loud thud. Connie bolted up to a sitting position. “What was that? What was that!”

“Well, where are you?” Connie asked.

Out of the darkness came Mom’s sweet voice. “I’m on the floor. That’s where you go when you fall out of bed.”

The night before – we cried. This time we laughed.

The hospital in Ann Arbor is huge. Several floors. Numerous hallways. The hotel was a decent size also. After being there a week or two, going down this hallway and that one, and going up and down in elevators, you can get a little confused as to where you are.

One time when we got on the elevator and the door started to shut; a man was walking toward the elevators. Wanting to be helpful, Mom shot her hand out to stop the door from closing. “Sir, are you going up or down?”

He gave her a disgusted look, shook his head and headed towards another elevator. As the door started to shut again, I told her, “Mom, we’re in the basement. I think he’s going up.” 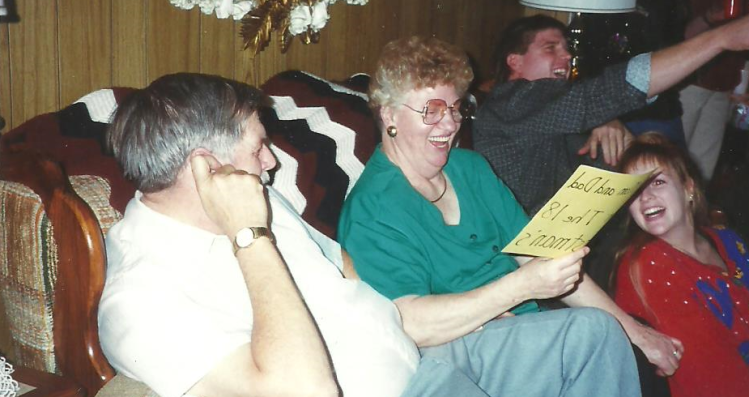 Another thing that makes me smile when I think of Mom is some of the sayings she had. If you were telling her about someone doing something mean, she would look so serious and say, “That dirty bird!” That was about as harsh as she could get.
Another saying she used if something was up was, “Something’s gone wrong in Denmark!”

Mom loved to cook. It was part of her wanting to take care of us and make us happy. She made the best lasagna. Any potluck we went to, everyone always wanted Roses’ lasagna. That was just one of her many great dishes. None of us ever went hungry.

If you ask anyone that knew her what they remember or miss the most about her, most people would say “her laugh.” I don’t think she ever had a halfhearted conversation with anyone. When someone was talking to her, she would listen intently like what they said was the most important thing in the world. If they surprised her with something funny, she would burst into laughter. It was such a joyous, bubbly laugh that you had to smile even if you didn’t hear the joke.

My brother, Ken, does have a memory of the power of Mom’s laugh. One time he was giving her a ride in the yard on his dirt bike and he decided to pop a little wheelie. Mom started laughing. (Sometimes she would laugh if she was nervous). Ken said when she got laughing, he couldn’t get the front end of the motorcycle down, so they ended up doing wheelies all the way across the yard with the front end bouncing in the air. He tells of how scared he was. (He’s known to exaggerate for the sake of a good story– just a little).

She was nurturing also. She should’ve been a nurse. When Grandpa got in a motorcycle accident, a big chunk of skin and bone got taken out of his heel. While it was healing, it looked really disgusting. I was a kid and I couldn’t look at it. No one could, but Mom knew it was excessively dry and irritating him, so she would bring a chair over by his recliner and have him prop his foot up. She would rub lotion on it for quite a while. Grandpa loved it.

I could fill a novel about the wonderful, giving things that Mom has done. Her greatest joy was giving others joy. She didn’t have a mean, selfish or jealous bone in her. If someone had something fantastic happen to them, she was delighted. I’ve seen her at different times be so happy for someone else that she could barely stand still. I half expected her to start jumping up and down and fly up into the air.

Another thing that I have to mention about Mom is that she was a Christian. She enjoyed helping at church and singing in the choir. Her love for her Lord and Savior, Jesus Christ, has shown through in everything she did. Whenever she could, she shared her faith with others, wanting them to experience the joy that she had.

She’s been gone almost ten years now. On a rare occasion I still cry because I miss her, but mostly – thinking about her makes me smile or laugh. I feel like she’s still with me. She died, but her love never did. The world is a better place because of all the sweet memories she’s given everyone to hold onto forever. I wish for everyone that they have a Mom, or someone in their life, like my Mom.

For this Mother’s Day, I just wanted to give tribute to the most wonderful woman I have ever known.

Happy Mother’s Day to all of you.

I love you Mom!

By the way, does anyone know what happened in Denmark?